One of the most common practices among Hindus and Indian Buddhists was sculpturing a long time back. Hinduism focused on Indian art for many years. It is seen that the sculptures of gods such as Shiva were commonly produced. However, in the 16th century, under the Mughal Empire, Islam also developed an interest in arts and started production under Islamic rules. With time the arts prospered and thus in the year 1631, the construction of the Taj Mahal started. Today in this blog, we will dig in to the famous Khajuraho Mandir Sculptures. 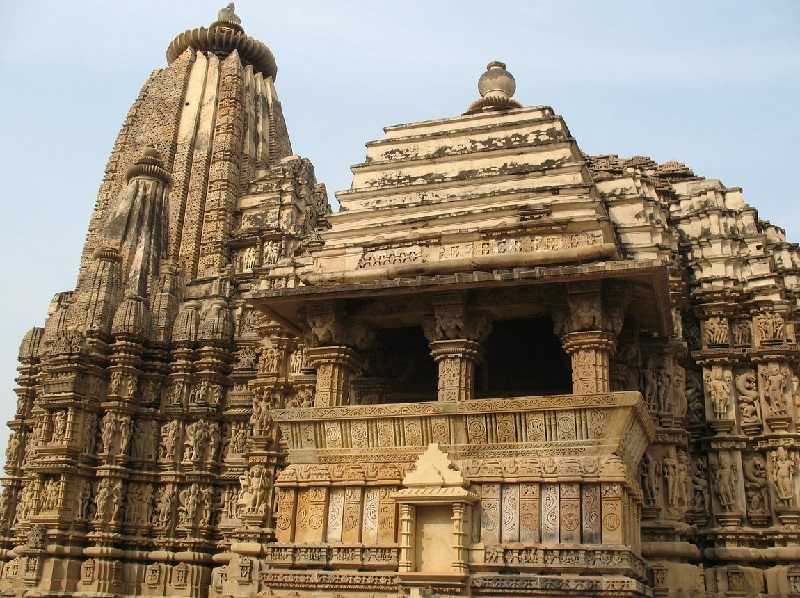 Historical aspects of the sculptures of Khajuraho temples

The temples were built between 885 AD and 1050 AD, during the Chandela dynasty. Most of the temples were constructed while the Hindu kings Dhanga and Yashovarman ruled. The Vishvanatha temple showcases king Dgabga’smonarchy. However, the largest and the most famous surviving temple of Khajuraho is Kandariya Mahadeva. It was constructed during the monarchy of king Vidyadhara. The inscriptions available at the temple claim that the remaining temples were all completed between 970 and 1030 AD.

The location of Khajuraho temples were about 35 miles away from the mediaeval city of Mahoba. Mahoba was also the capital city of the Chandela dynasty in the Kalinjar region. In ancient and mediaeval literature, it is mentioned that those kingdoms were identified as Jejohoti, Jijhoti, Chih-chi, and Jejakabukti.

According to the historical records, by the 12th century, the Khajuraho temple had around 85 temples. Of which, now only 25 temples could survive. The temples were spread in 20 square kilometers. The KandariyaMahadeva Temple was jeweled with sculptured with complicated details from the temples that could survive. It symbolizes and articulates ancient Indian art.

It is said that while these monuments were constructed, the boys of that place lived in retreat. They were Brahmcharis, which means being bachelor until they achieved manhood. Those sculptures in the Khajuraho temples helped them learn about the actual role of ‘householder’.

There are thousands of statues and artworks in Khajuraho temples. The KandaryaMahadeva Temple is decorated with more than 870 sculptures. Only 10% of the sculptures contain sexual themes and different sexual poses. There was a very common misunderstanding regarding the old sculptures of Khajurahotemples. It was believed that the sculptures resembles sex between gods and goddesses. Whereas the kama arts represent various sexual expression of different human beings.

Besides, most of the artworks at Khajuraho temples are made by taking inspiration from the everyday life and mythical stories. Also, it showcases different secular and spiritual values that are essential in Hindu tradition. Say for an instance, some sculptures shows musicians singing, women doing make-up, farmers, potters, etc. These sculptures are commonly seen in the outer padas of typical Hindu temples. The key Hindu values are showcased in various ways in the Khajuraho temples.

Other than that, Khajuraho temples present one expression in various forms of arts. It wasactually raised in Rajput Kingdoms of India, started from 8th century till 10th century CE. For instance, many poems and dramas were published in Khajuraho,like Kavyamimansa, Prabodhacandrodaya, Viddhasalabhanjika, and Karpuramanjari. A few of these themes expressed inKhajuraholiterary works are made as sculpture in the Khajuraho temples. Apart from this, some sculptures in Khajuraho monuments are also dedicated to Lord Vishnu. It includes the Vyalas, which are actually hybrid fictional animals combined with lions’ bodies are found in various Indian temples. Besides, some of these fictional mythical artwork are VrikVyala, a hybrid of wolf and lion, and GajaVyala, a hybrid of elephant and lion, seen in Khajuraho Temples. These sculptured Vyalasseem to represent unique, creative and fictional combination of power and peace as a whole.

Location: The Khajuraho Temples are located in the Indian state of Madhya Pradesh, in a district named as Chatarpur.

The sight of Khajuraho Temples is unique and worth a visit. If we have missed any important information, please do comment below with the updated information. We will be pleased for your efforts to deliver correct information to the world.

A:During 1830s, some local Hindus enlighten a British surveyor, T.S. Burt, about the temple. Then, it was rediscovered and introduced tothe globalaudience.

Q: Which is the main temple of Khajuraho?

Q: Who was the king during the building of Khajuraho Temples?

A:During the 10th of century, Chandela ruler Yaahovarman became an independent king. He was the king during the during the Khajuraho temples were built.

Q: Is Khajuraho open on Sunday?

Q: How many days are ideal for a complete visit of Khajuraho?

A: You will need 2 days to have a complete tour of all the temples of Khajuraho. The temple is divided into 3 parts- South, East, and West, which is the biggest and the main part. All the temples are in the town, and are approximately 5-10 minutes away from most of the hotels.