The largest international tourism exhibitions – Business + Leisure Travel and MICE (BLTM) and OTM took place in Delhi on September 10 – 11 and in Mumbai on September 13 – 15. During the events, St. Petersburg presented its tourism potential for visitors and residents of the Asia-Pacific region as one of the key areas of both domestic and inbound tourism.

St. Petersburg is the second largest city in Russia and home for dozens of landmarks famous both inside and outside Russia. St. Petersburg is one of the top 100 most visited cities in the world according to Mastercard Global Destinations Cities Index, and its population is comparable to that of Denmark. Nevsky Prospect alone is a pathway for about 2 million people a day. Despite its relatively young 300-year history, the city has changed its name several times, was the capital of Russia, a starting place of revolution, and has been described in hundreds of literary works. Now St. Petersburg is a center of culture, leisure, gastronomy, science, and tourism. 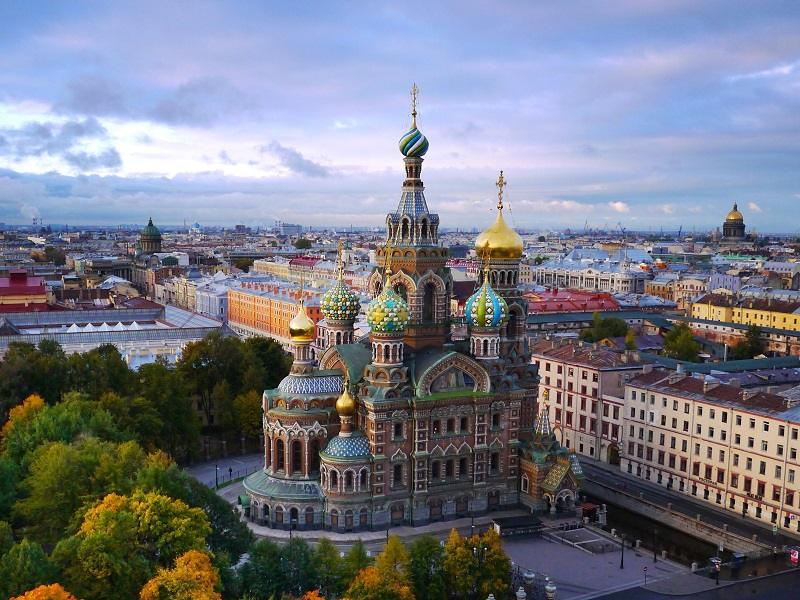 St. Petersburg exposition at BLTM and OTM exhibitions became the center of attraction of the business program events. The opening ceremony was held on the city’s stands on the Neva River accompanied by classical music performed by St. Petersburg musicians. St. Petersburg’s exposition amazed the participants and guests with its famous drawbridges and sailboats sailing under them on crimson sails. St. Petersburg stand was traditionally presented by the St. Petersburg Committee for Tourism Development together with the Convention Bureau and various tourism spheres representatives. Thanks to its colourful and unforgettable design St. Petersburg’s stand received a special award at BLTM exhibition and was acknowledged as the best decorated exposition of the event. In addition, the exposition received the “Best upcoming destination” award as the most popular tourist destination at OTM.

St. Petersburg was the partner city of BLTM in Delhi. In addition, this year St. Petersburg and Mumbai celebrate the 55th anniversary their official status as twin cities. This important milestone of the Russian-Indian relations was celebrated at the OTM exhibition in Mumbai. Indian tourists are assisted in their travels to St. Petersburg by the Visit Petersburg office, which has been working in Mumbai since 2017.

The exhibitions also presented the areas of medical and business tourism. St. Petersburg offered a wide range of opportunities for training and certification of specialists. The city is known for its high-tech medical centers, unique state-of-the-art equipment, and world-renowned doctors. At BLTM the organizers highly appreciated St. Petersburg’s contribution to the business program of the event, and the city on the Neva presented international travel destinations and ample opportunities for events of all sizes.

St. Petersburg aroused great interest among representatives of the tourism industry in India and other countries. There were about 500 meetings, including a meeting with representatives of the Saudi Tourism Authority – head of marketing Mr. Alhassan Aldabbagh, head of international and executive relations Mr. Abdullah Allagbani, head of strategic development Mr. Hazim Al Hazmi. Points of discussion during the meeting were the issues of joint cooperation in increasing of tourist flows, visa support, logistic routes, and also the interest of tourists in visiting medical institutions in St. Petersburg. There was also a meeting with the Minister of Tourism of Maharashtra State, Mangal Prabhat Long, where St. Petersburg presented the city’s potential for receiving tourists from India. The minister highly appreciated the presentation of St. Petersburg stand. During the negotiations with Consul-General of the Republic of Indonesia in Mumbai Agus Saptono they discussed increase of the mutual tourist flow between Bali and St. Petersburg. Another negotiations were held with Mr. Rajesh Kale, deputy director of tourism of Goa, where they discussed the possible participation of representatives in the project “International tourist forum Travel Hub” which is planned to be held in St. Petersburg in 2022.

During the meeting with Romana Parvi, the Regional Manager of “Jazeera” airline, the need to increase the number of direct flights between St. Petersburg and Indian cities was discussed. Within the framework of negotiations with the Minister of Tourism of the State Punjab Anmol Gagan Mann the issue of increase of mutual tourist flows and also promotion of different tourist routes and directions was raised. In addition, a meeting was held with Denis Erzol, Advisor on Culture and Tourism of the Embassy of the Republic of Turkey, during which they discussed the promotion of tourism destinations.

For the last 10 years the flow of tourists from India to Russia, in particular to St. Petersburg, has been growing steadily on average by 15-20% per year. The Russian-Indian Information Center, established in 2013, plays significant role in this by supporting Russian travelers in India and Indian travelers in Russia. In addition, a Visit Petersburg office opened in Mumbai, where Indian travelers can get all the necessary information about St. Petersburg while planning their trip to Russia’s northern capital.

BLTM and OTM exhibitions are the largest in the Asia-Pacific region. They are events for representatives of the tourism and business travel industry. This year BLTM brought together over 130 exhibitors and more than 1,200 professional buyers from 14 countries and 18 Indian states. OTM was attended by more than 1,100 exhibitors, 25,000 trade visitors and 500 buyers from 55 countries. The events showcased new products and services from tour operators, travel agencies, national tourism bureaus, hotels, resorts and other industries.